This procedure is performed using the da Vinci Surgical System. It is a breakthrough surgical platform that enables gynecologists to operate with unmatched precision, vision, and control. By overcoming the limitations of both traditional open and laparoscopic surgery, da Vinci is revolutionizing gynecologic surgery for women. 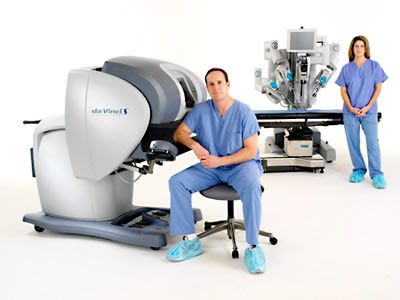 A wide variety of benign (non-cancerous) conditions, such as chronic pelvic pain, heavy bleeding, fibroids, endometriosis, and/or prolapse, can affect your reproductive system — the uterus, vagina, ovaries, and fallopian tubes — and most of these conditions affect the uterus. It is a hollow, muscular organ that holds a baby as it grows inside a pregnant woman.

When medication and other non-surgical options do not relieve your symptoms, surgery may be recommended. It can provide a more effective, long-term solution for a variety of gynecologic conditions. If your doctor has recommended a hysterectomy, you are not alone. One in three women in the United States will have a hysterectomy before turning 60.

A hysterectomy can sometimes be performed through the vagina. But, when the uterus is enlarged or if you have internal scarring from prior surgery or other conditions, an open abdominal hysterectomy is usually performed. Open abdominal hysterectomy requires a long incision below the navel. This procedure can be painful, involving strong medications, a risk of infection, and significant blood loss. After surgery, a long recovery (often 6 weeks) is necessary. In addition, many patients are not happy with the scar and abdominal muscle weakness caused by the incision.

While hysterectomy is a relatively safe procedure, it may not be appropriate or necessary for all women or conditions. Alternatives to hysterectomy that preserve the uterus may be available. For example, da Vinci® Myomectomy is a minimally invasive surgical alternative to hysterectomy. It may be an option for women with fibroids who want to preserve their fertility and/or uterus. Always ask your doctor about all treatment options, as well as their risks and benefits. For more information click here. 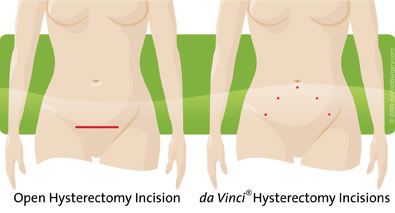 A. MIS is surgery typically performed through small incisions, or operating ports, rather than large incisions, resulting in potentially shorter recovery times, fewer complications, reduced hospitalization costs, and reduced trauma to the patient. While MIS has become standard-of-care for particular surgical procedures, it has not been widely adopted for more complex or delicate procedures — for example, prostatectomy and mitral valve repair.

Q. What are the benefits of da Vinci Surgery compared with traditional methods of surgery?

A. Some of the major benefits experienced by surgeons using the da Vinci Surgical System over traditional approaches have been greater surgical precision, increased range of motion, improved dexterity, enhanced visualization, and improved access. Benefits experienced by patients may include a shorter hospital stay, less pain, less risk of infection, less blood loss, fewer transfusions, less scarring, faster recovery, and a quicker return to normal daily activities. None of these benefits can be guaranteed, as surgery is necessarily both patient- and procedure-specific.

Q: Where is the da Vinci Surgical System being used now?

A. da Vinci Surgery is categorized as robot-assisted minimally invasive surgery, so any insurance that covers minimally invasive surgery generally covers da Vinci Surgery. This is true for widely held insurance plans like Medicare. It is important to note that your coverage will depend on your plan and benefits package. For specifics regarding reimbursement for da Vinci Surgery, or if you have been denied coverage, please call the Reimbursement Hotline at 1-888-868-4647 ext. 3128. From outside the United States, please call 33-1-39-04-26-90.

Q. Why is it called the da Vinci ® Surgical System?

A. The product is called "da Vinci" in part because Leonardo da Vinci invented the first robot. He also used unparalleled anatomical accuracy and three-dimensional details to bring his masterpieces to life. The da Vinci Surgical System similarly provides physicians with such enhanced detail and precision that the system can simulate an open surgical environment while allowing operation through tiny incisions.

If you need a hysterectomy, be sure to get more information about the da Vinci Surgical System. Dr. Owens will be able to determine if this minimally invasive surgery option is right for you and your unique case. Contact Advanced Pelvic Surgery to learn more.